As you can see, amateur television (ATV) is one of my ham hobbies. I’m involved with the K6BEN-ATV group based in Silicon Valley which has a video repeater on Loma Prieta (used to be on east SJ foothills) that can be seen throughout the south SF bay area.

This is real TV, not cellphone cam. Transmission mode is like commercial televisions, the difference is we don’t do entertainment, sports, or other commercial activities. Our signal is NTSC and can be viewed by regular TV sets. Unlike the big boys of commercial stations, we don’t have a gazillion watt megabuck transmitter, we don’t have a flashy studio with armies of technicians and actors, and we don’t have a $2,000,000 ENG van. And all our TV transmissions DO NOT have commercials.

I sometimes do simplex ATV but most of the time I use the K6BEN repeater from my home or the field. Our group has lots of fun with field activities as we do all what the big boys do but obviously non-commercial (but we do want one of those ENG vans). So take a look at some of our field work in the links below.

I was involved with re-transmitting Space Shuttle activities from NASA-TV during shuttle missions (link below).

My uplink antenna is this 1.2 GHz yagi antenna (given to me by Joe WB6RIY), aimed at K6BEN video repeater on Loma Prieta.

A transmit antenna I use for field operations is the Comet 1216E 16-dB yagi antenna. At 54 inches long, it is easy to transport.

Downlink is 427.25 MHz which is also TV cable channel 58 so a consumer type TV set or a VCR can be used to view this frequency. Like other regular TV channels that have combined audio carrier with the video carrier, this channel includes the audio from the 2-meter radio. Viewers only need a common cable ready TV set to see and hear K6BEN-ATV.

I use a 3-element 440 yagi antenna from Centerfireantenna.com which is also great for the field as it has good gain and small size. The antenna is aimed towards Loma Prieta. Other people have used UHF omni antennas and even rabbit ears. The more line-of-sight, then the better. Antenna should be vertically polarized to pickup the K6BEN signal. Regular TV antennas do not work well because they are too wideband (470 to 800 MHz) and gain for a specific frequency is poor.

K6BEN is not a powerful transmitter like commercial stations so one cannot expect clear reception everywhere in the bay area. However, with reasonable line-of-sight and a good antenna, K6BEN can be quite adequately viewed. One can also use a little 12 dB pre-amp for TV sets. Viewers may see white lines on the pictures, these are radar interference into the 1255 MHz uplink. 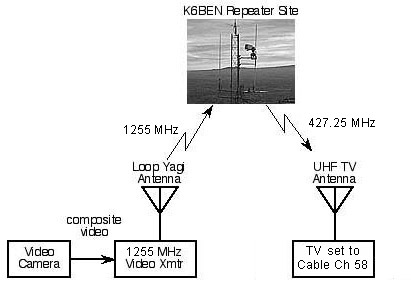 Uplink to K6BEN can be tricky because 1.2 GHz is very directional, good line-of-sight to the K6BEN repeater with a good antenna is more effective than brute force using high transmitter wattage. Sometimes you can reflect your signal off a building. Two watts from the Z23B and a directional antenna of at least 16 dB is sufficient. An 18 watt linear can improve somewhat but if you cannot contact K6BEN with 2 watts and a good antenna, then you may not be able contact it at all.

The images below are video captures on a PC. The ATV system I used is setup in my condo with the antennas pointed towards the K6BEN amateur television repeater. Because of the restrictions, these antennas are not outside but inside at the windows. 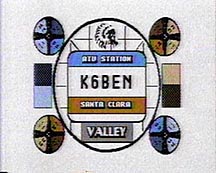 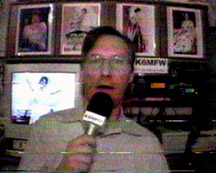 Here is the test pattern from K6BEN, me during video net control, Ben W2NYC showing off his new camera. 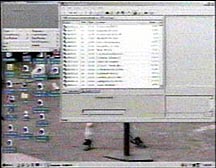 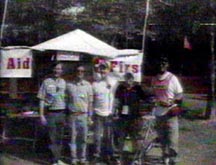 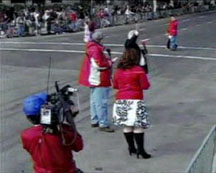 Some other things you can do on ATV include displaying your computer screen (need a composite video output) and showing a picture from a digital camera (communications support group for the 2003 Walk For AIDS). Transmissions of Veterans Day Parade in San Jose (I used an ENG camera with lowpower UHF transmitter to the video platform) as an example for situations of using ATV in the field for ARES or RACES events. 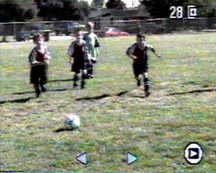 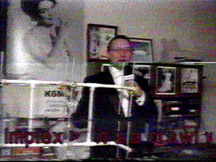 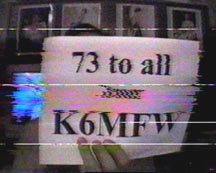 Here is Ben transmitting the video output from his digital camera with a still of his grandson’s soccer game. Center photo is me as K6BEN Wednesday night Net Control on New Years Eve (the tuxedo for a dance party later that evening). I was showing a new antenna (for UHF TV reception on 427.25MHz) designed by Walt Lau KK1CW. And the photo on right of me signing off.

Click here for more info on the K6BEN repeater

Following are transmissions uploaded by others:

Amateur Television Presentation: http://www.youtube.com/watch?v=Pxt9l4abPiw
I presented ATV at the 2006 Linux Field Day though I could not get an uplink but Alexander Grundner taped and uploaded this footage.

Some of my ATV Activities: