High altitude parachute jumps are sometimes performed by Special Operations Forces as a means of infiltration which they call "HALO" or "HAHO." These forces include Army Green Berets, Navy SEALs and Marine Corps Force Recon. Pararescue PJs (the Rodney Dangerfields of SOF), use HALO/HAHO as part of their capabilities for combat paramedic operations. 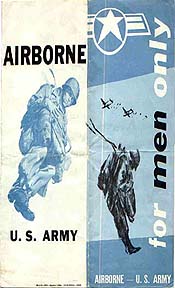 HALO/HAHO jumps are not the same as Army Airborne static-line jumps, the most common type of military parachuting. Static-line jumps are done very low (1000 feet or less) and they use round parachutes. Airborne use static-line technique to deploy large numbers of troops into an area by the quickest means possible. Following photos from DefenseLINK photo gallery show some static-line jumps: 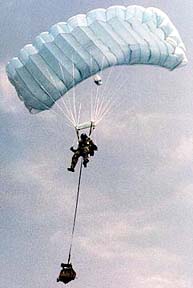 "HALO" for High Altitude Low Opening, the military term for skydiving, is freefalling in "tactical grouping" (sport skydivers call this no-contact RW). There is also "HAHO" for High Altitude High Opening where the jumpers open at a high altitude like 25,000 feet, and glide long distances to the landing area (sport skydivers call this cross country). 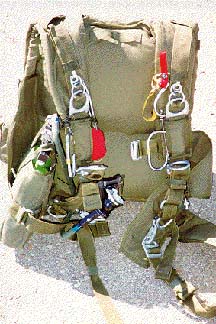 Military skydiving rigs are known as HAPPS (High Altitude Precision Parachute System) or "stealth parachutes" because they cannot easily be seen from the ground. In this photo of the MT-5 you can see that these rigs are very similar to sport skydiving rigs. All the handles are in the same place but there are a number of attachment points for additional equipment and a harness for the O2 equipment. The typical canopy size is 360 sq ft on both the main and reserve.

HALO altimeters (click here a diagram of MA3-30) similar to the SSE, Inc Altimaster II of 12,000 feet per revolution (with 250 ft marks) but these units are more heavy duty, more accurate readings, and the units include a nightlight (powered with 2 AA cells). Photo of the new MA3-30 from SSE, Inc., click here.

Another type of HALO/HAHO rig is the MT1X shown here. It is the previous issue from the above unit in dark green. Virtually the same with attachment points and fittings for oxygen and other equipment. All the handles are in the same place as sport skydiving equipment. The main is ripcord activated. [Editors note: This is not a Soviet cosmonaut jumping US gear, it's only me. Besides, I don't think there are cosmonauts that were glasses.]

Unlike the civilian skydiver who jumps for fun and ends the day by partying, drinking beer, and swapping jump stories, the military freefall jumper uses the equipment simply as a means to reach their final objective, such as recon, "achieving the objective," extraction and mission de-briefing. Military jumpers also carry tons of equipment (150 lbs). Why so much? Two reasons: One, HALO/HAHO personnel are typically dumped in very remote areas and have to carry all their food, guns, survival gear, water, and all kinds of secret stuff. Two, keeping with tradition that mil jumps be rough so their men have to be tough.

Editors Note:
I talked with a former SEAL and I asked, "Must be fun getting to freefall, canopy ride and scuba on the same jump!" He said it isn't fun. "All training missions are designed so you do not have fun."

Hollywood occasionally shows HALO missions in the movies such as "Navy SEALS" as "Rambo raids" [but then Rambo doesn't need to carry O2 or carry tons of equipment, he can get by with just a 24-foot unmodified round and defeat an entire division with just a bayonet.] 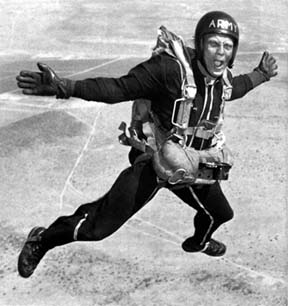 Bob McDermott, First Sergeant of the Army Parachute Team. Photo by Joe Gonzales. From the 1975 book Sport Parachuting by Charles Ryan. Another form of military parachuting are demonstration/competition teams such as the British RAF "Falcons" and the US Army "Golden Knights." These teams represent their military service during exhibition shows or parachuting competition. Their equipment and type of parachuting are identical to sport skydivers, which includes sport canopies, RW, CRW, and style/accuracy. They do jump modern equipment unlike the photo above (it's a cool photo of McDermott so I used it here).

Here is a picture of me with a HALO rig with a standard rucksack (upside down). This particular rucksack was quite light, only 40 pounds. There are quick-releases to lower the rucksack on a lanyard cord after canopy opening. It's also important to check the lanyard is attached, or you will find your rucksack falling freely away after release.

Oxygen Equipment
Here are some pictures showing the kinds oxygen equipment the military uses, similar to equipment used by cilivians for unpressurized aircraft but heavy duty. 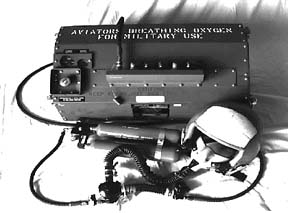 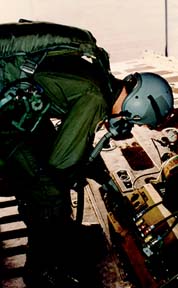 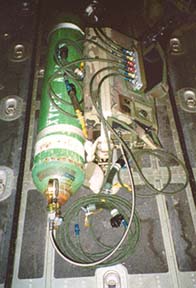 What the Air Force has that cilivians don't have for HALO jumps are big airplanes with large rear exit doors as seen in these photos [We do welcome any AF commanders that will loan us one of these planes for our civilian HALO jumps at Davis every year!]. 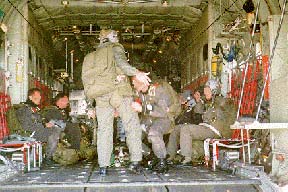 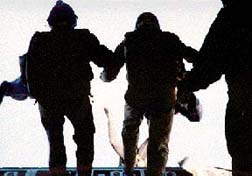 129th Rescue Wing “Golden Gate Guard” has HALO/HAHO capability. see http://www.129rqw.ang.af.mil
(editor's note: this link seems to come and go, and many times it's UTL). Click here for more on the Maroon Berets. 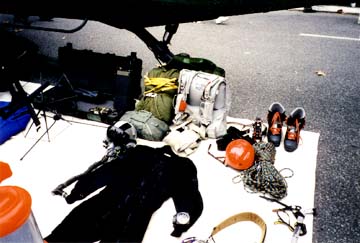 Along with freefall and static line rigs, 129th PJ’s gear includes mountain climbing and satellite communications equipment. They also pack full paramedic supplies including defibrillator and drug box. The Pararescuemen, or PJs as they are commonly called, are highly specialized, EMT qualified, medical specialists who are trained to parachute from the MC-130 aircraft. PJs can perform rescues in all terrain environments. They are additionally trained in scuba, mountain climbing, desert and arctic operations. 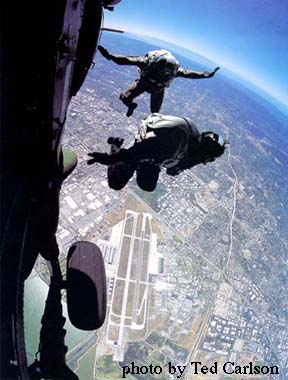 Ted Carlson snapped this photo of PJs from the 129th exiting a HH-60 over Moffett Federal Airfield in the Silicon Valley.

Pararescue Association has a webpage at http://www.pararescue.com

1st Battalion (Airborne) 507th Infantry at http://www-benning.army.mil/airborne is where life is grueling and jumpers spend a long time on static line.

from the US Army Air Corps Pilot's Information Manual Nov 1, 1944:

Note: This page is not to be considered technically accurate.