Event was a success. Video streaming was arranged by Michael KF6WRW, jumper #2, http://www.justin.tv/kf6wrw/videos and there are some clips archived.

One of the activities is Parachute Mobile where radio-equipped skydivers perform radio contacts, transmit bio-medical data and live television while in the air under parachute. Jumps are scheduled at Byron Airport in Contra Costa county on other side of mountain range from Livermore. Air to ground amateur television (ATV) will be done at the airport. Received video will be internet streamed via justin.tv to be viewed by Pacificon attendees at Santa Clara Marriott and watch live television transmissions from the skydiver.. It was first planned to re-transmit these video transmissions to W6CX ATV repeater on Mt. Diablo. An ATV receiver at Ames Amateur Radio Club would then re-transmit this signal to K6BEN ATV repeater on east San Jose foothills.

A number of technical hurdles are present but AARC members are working in cooperation with those on Parachute Mobile, W6CX, and K6BEN teams. Presented here are some of the items used in this activity.

Depending on event schedule, AARC may re-transmit amateur radio activities on ISS during weekend of Pacificon.

Pacificon features a full slate of forum presentations about a wide range of amateur radio related topics, a large hall filled with exciting product exhibits, a series of demonstrations, activities, an outdoor Swap Meet, a one day Technician Class to prepare you to pass the examination for your first ham radio license, fun and informative T-Hunts, a chance to discuss important national amateur radio issues with top ARRL leaders, the Boy Scout Jamboree-On-The-Air (scouts in uniform admitted free), chances to win great radios and other prizes throughout the convention, and perhaps the best part - interact and share information with lots of other amateur radio enthusiasts to further (or begin) your own knowledge and to advance the hobby. 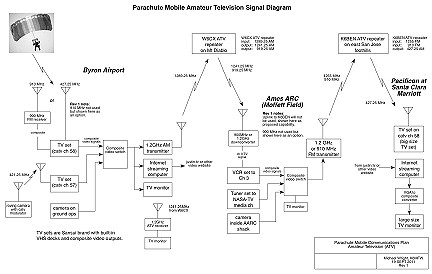