I wrote the following to document how I configured radios for APRS position and PulseOx oximeter data telemetry (and for me in case I forget specifics on configuring this device). 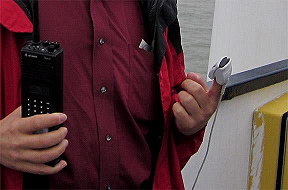 Nonin 3212 oximeter is placed on my index finger, it connects to a Argent Data OT-USB that sends APRS packet data to a Kenwood TH-F6 portable radio. The BK DPH handheld in the left is used for voice contacts. Nonin 3212 oximeter has three connections: +5VDC, common, and RS232 9600 baud data out (but serial data is non-standard).

photo of OpenTracker-USB to radio connector 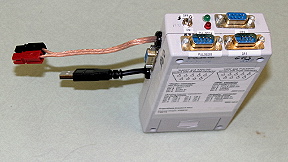 I wired a T3-Mini into this box with all connectors, LEDs, and power switch on top. Exception is analog inputs connector on side. Intent for this package is when placed in a pouch, pocket, or under seat in car, all cables go in one direction. Other exceptions are DC power and USB, not enough room on top. Printed on side are pinouts to connectors, avoids having to refer to documentation when building new cables. I used DB9 connectors as these are rugged and mates are common. Anderson powerpole is for external 12VDC. There is a spot for a 9V battery inside, this needs to be removed if connecting to 12VDC. Also internal is a fuse.

I had problems with my Tracker3-mini when I wired it into a box. It could not power both a GPS on port A and a PulseOx sensor on port B. I got it working by using a separate 5V regulator to power the GPS and PulseOx sensor. I also replaced the 680 ohm resistors for external LEDs with 1K resistors to reduce current draw from T3-mini board. With these changes made, it works as expected.

Other photos:
Inside box with T3-Mini
Connection diagram of T3-Mini box

I designed Tracker 3 box to have same pinouts to GPS and PulseOx sensor as the OT-USB. 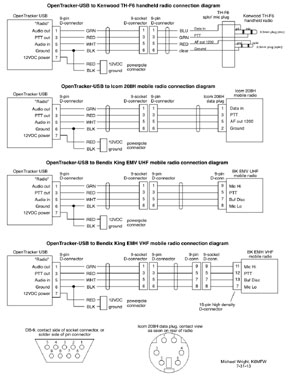 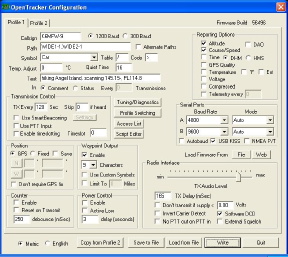 Here is where you configure the OT-USB with a PC, connect the two with USB cable and run otwincfg.exe. I configured the following: 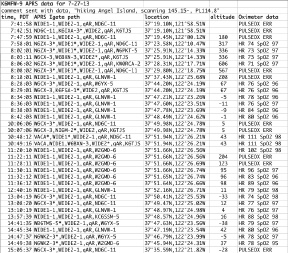 I used a Kenwood F6 handheld with 1/4 wave dualband whip in my front pocket to transmit APRS. Another handheld I scanned W6PW repeater in case any hamsters read my APRS comment. However for SF W6TP and WA6TOW are more popular repeaters. Spreadsheet shows data collected by igate stations. I began transmissions when I left home, there are some periods when I turned off APRS while hanging around Pier 41 (I spent some time with the touristas). I stopped at Airport Marriott and turned off APRS (to get tickets for Intl Grand Ball dancesport competition I attended later that night).

Other activities I’m involved with that extensively use APRS: