Skydiving In The Days When The World Was Flat

And The Parachutes Were Round

12-10-12 update: I found these photos of me when I did this jump at Paso Robles, CA. Unfortunately I never got pics with Steve. Al Stephens, DZ owner at the time wanted me to pose in front of this airplane that didn't exist in 1960s to show this was done in modern times. 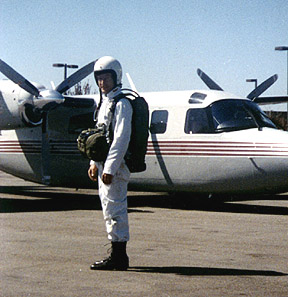 I was reading a recent issue of Parachutist magazine that showed the many different types of skydiving these days. Many that have been developed in the past ten years. I wonder what skydiving will be like 20 or 30 years from now. What will the gear be like? I met Bill Booth and asked him this question and his reply was the canopies don't need to go faster as they already go fast enough, the equipment probably doesn't need to be smaller, and he summed it up as he really couldn't say. Bill then laughed and said, "Someone asked me that same question 30 years ago and told him that there will be nothing better than the Paracommander!"

I have read and talked to people that jumped equipment in the BS days (Before Squares). Interesting of all the types of parachutes available back then: T10, Paracommander, Paradactyl, Irwin Parawing, and the Thunderbow. Even the early squares were of dubious nature. Some called the Stratostar the "Stratorock." My instructor told me to don't even think of jumping this stuff, be glad that I have good knees and stay with squares.

I cannot predict what skydiving will be 30 years from now, so I decided to see what skydiving was like 30 years ago with a historical research jump. This was to jump a Papillon parachute (similar to the Paracommander). To prepare for this jump, which required a minimum of 200 jumps under a square (a reverse of what it used to be), was a half day of training on PLFs and emergency procedures. The cutaways were Capewells (really scary) and that you had to pull and punch the front mounted reserve (this was the improved system. The other is after pulling the ripcord, you grab the reserve and throw it in the direction of the spin. Also known as the "Shake and Bake" reserve). The winds had to be very light and no RW! Ripcord handles protruding everywhere. The harness had ejector snaps. A hard dock can "eject" you out of the rig! 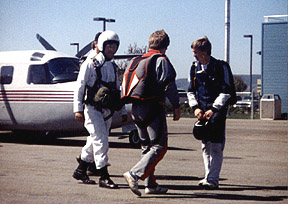 So there I was, complete with proper 1960s "Fall Fashion" of mechanics overalls, paratrooper boots, and a Bell motorcycle helmet. After geared up and walking to the plane (single engine Cessna, an old fashion jumpplane from the 20th Century) some of the students were asking what is the thing (the belly reserve) on my chest, "Is that a camping kit?" Just then, Steve, a big time sport jumper, rigger, active Army Airborne, drove up and said, "I want on that load!!!" as he grabbed his Paracommander rig from his van. DZ people said the plane was full but Steve said, "Well, kick someone off." Which they did so we had two round jumpers on the load.

Let me tell you these big sage green rigs are not comfortable (I wonder how people used to dealt with these on slow jump planes). And then at 7500 feet, the spot, the climbout, and GO! I leaped into space, spread eagle. Just like in the 60s television series "Ripcord" (Adventure Straight Down). Steve followed me out. I then relaxed into the "frog position." Steve did a couple of "full series." I pulled the ripcord at 4500 to give me "plenty of time" for emergency procedures. After pulling the ripcord and waiting what seemed like forever, boom! canopy shock. I looked up to check for malfunctions: Roman Candle, Mae West, or too many blown out panels and broken lines. I had none of those and the spot was great (you had to spot with round parachutes. Spotting was a navigation technique practiced in the 20th Century. A jumper would look outside the airplane at key geographical fixtures and direct the pilot to precisely fly over the intended landing area).

I was surprised how maneuverable the Papillon was. I was able to steer to the peas. Setting up for landing is not like a square where you line up on the glideslope. Here you "prepare for impact." Feet and knees together, grab rear risers, look to the horizon (oh my gosh! the feeling of "ground rush") and then, ka-pow and plop as me and the parachute fall on the ground. The whole experience was "bitchin." They say that you make standup landings in these type of parachutes but for me a "stand-up" meant I could stand up after landing.

I was assisted packing this mess and this was really helpful. These Paracommander type canopies are really complicated. Plus, the pilot chute that has a big spring built inside the fabric. Then you have to squeeze the whole thing into the container and the flaps are fastened with three pins. Did you know that this big container on your back carrys only one parachute. Since there is no room for a reserve on back, it is mounted on front.

I mentioned this story to some longtime jumpers and they said, "You did what!?! Only stupid people jump that crap." This is probably not what they meant to say because, "What the hell were you guys jumping with back then?"

Would I do this again? (probably not) Would I recommend it to anyone else (no). You really need to understand that many people went to great pains to develop the equipment we have nowadays for GOOD reasons.

Here is Michael Gawley's experience of jumping rounds:
I haven't made a jump in almost 20 years, but back when I used to, they were pretty rough. I was too poor for a Paracommander so I bought a chute that my instructor had laying around his garage. It was a 22 year-old Navy 28' canopy that had been tie-dyed to a horrible red/white/blue combination. My reserve was an old 24' canopy that, mercifully, I never had to use. As it was, I used to scream into the ground with that 28 footer and would lay on the ground for several moments, deciding if anything was broken, before I could stand. One day my brother-in-law sent me a 35' canopy from Ft. Bragg. I got out the scissors and sewing machine and made the famous 7-TU modification on it (to match my Navy chute) and the landings were much softer. Only problem was that the darned thing was so big that I had to extend the surplus AF pack to make room for it and it was *very* difficult moving around the plane with it on.

[Michael also sent me this message:]
"I still have both of these rigs laying around here somewhere. If you would like the experience the *real* old timer crap, I'd be glad to loan the 28 footer to you! I can even dig up my motorcycle goggles, mechanic's coveralls, and gardening gloves, if you like!" [thanks but no thanks]