The in-flight crew escape system is provided if the orbiter is unable to reach a runway, an alternative to water ditching or to landing on terrain other than a landing site. The probability of the flight crew surviving a ditching is very small. 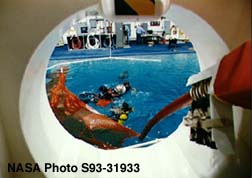 The bailout sequence begins with the orbiter in a autopilot glide. Crew depressurizes the cabin to equalize the outside pressure and pyrotechnically jettison the hatch. A long escape pole is quickly deployed out the hatch. One by one, each crew member attaches a lanyard hook which is connected to his or her parachute harness to the escape pole and jumps out the door. Attached to the escape pole, the crew member slides down the pole and off the end. The escape pole provides a trajectory that takes the crew members below the orbiter's left wing. An automatic activation device deploys the parachute canopy.

This photo shows the escape pole extending out the mockup door towards a pool used for emergency bailout training. 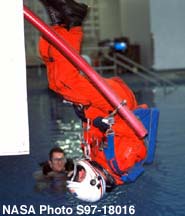 A typical exit altitude begins at about 30,000 to 20,000 feet. Spacesuits provide protection against sudden cabin depressurization since the normal orbiter cabin pressure is at sea level pressure. For emergency bailout, the astronauts will not have time to do a proper pre-breath like skydivers jumping from 30,000 feet. Also, the suit provides protection against the highspeed air blast while exiting the orbiter and extreme exposure protection if landing in frigid North Atlantic waters. This crew escape system cannot be used during ascent (main engines and SRBs burning).

This photo shows one of the astronauts sliding down the escape pole and into the pool. 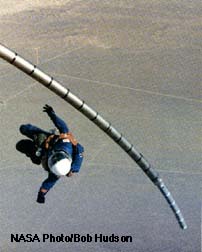 This photo shows one of the test jumpers falling away from the pole during the evaluation of the crew escape technique at China Lake Naval Center. They jumped with the same outfit as Shuttle astronauts but with something extra: A belly reserve. Test jumper Bob Hudson, D2842, said of the Shuttle crew escape system "You bet -- This will work!" 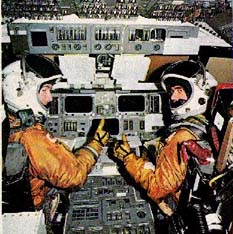 The first four Space Shuttle flights were equipped with ejection seats, similar to those on SR-71, for the commander and pilot (the only two crew on board for STS-1 thru STS-4). The ejection envelope was good to 100,000 feet. This photo shows STS-1 crew John Young and Bob Crippen in suits identical to those used by SR-71 pilots. The ejection seats take up a considerable amount of room on the upper flight deck.

Astronaut Janet L. Kavandi awaits the start of an emergency bailout training session. She is wearing the pressure suit (blue) and the parachute gear (orange).Tubes on the side of the container are the built-in inflatable life-raft. (NASA Photo S98-04727) 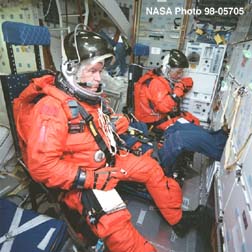