“Oakland Center, we have jumpers away at flight level three zero zero.”

(was created on April 7, 1997 at www.batnet.com/mfwright/30Kjumps.html
but ISP changed domain to userwebs.batnet.com)

Note: Many links on this site are not working, pending updates (i.e. chasing info that disappeared).

OCT 2012 UPDATE:
Felix Baumgartner now has the highest skydive from 128,100 ft on October 14, same day as 65th anniversary of first (controlled) manned supersonic flight by Chuck Yeager in 1947, see http://www.redbullstratos.com. A launch on October 9 was scrubbed due to gusty winds, which that day was 20th anniversary of 30,000 ft skydives (which I was on that group, 2nd load) at Davis, CA.

Almost all skydivers are familiar with Joe Kittinger prior to Baumgartner’s Oct 14 jump held the highest parachute jump from 102,800 done in 1960. Joe, now in 2nd place on altitude jumps, was Capcom for Felix Baumgartner. There have been many others over the past 50 years attempting to break the high jump altitude record, but simply put the logistics are staggering. Jumping from 30,000 ft which is basically twice the typical skydive jumpship exit altitude, requires a huge amount of preparation and use of special equipment.

(he is the one that supervises 30K jumps at Davis) you will need one of these, click here for Spacesuit Photos 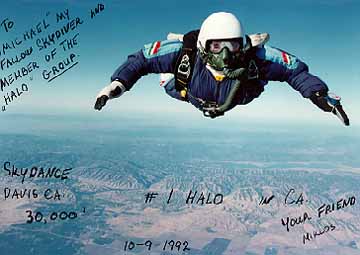 Mike Ince is there to photograph Miklos Talyak, the first to jump from 30,000 feet over Central California (meaning he left the plane first). Miklos is also the first Hungarian to skydive at the North Pole. “HALO” means “High Altitude Low Opening,” a military term for skydiving.